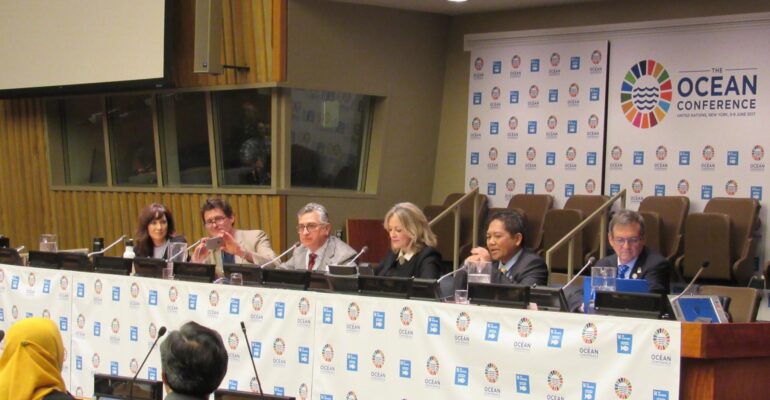 On one Tuesday not too long ago, when the lights rose, vigorous applause heralded a milestone for our documentary A Plastic Ocean because this was a milestone audience. We were screening at the United Nations, for more than 600 delegates, policy-makers, and engaged activists.

As someone who has been in the film industry for three decades, I am critically aware that the greatest obstacle to getting a movie made is not getting the money. It is having enough value. If a potential film project can demonstrate that it has sufficient value, money rushes to it like a river coursing toward the sea.

In conventional, scripted movies, value is measured along a single vector, the vector of profit. If you are an investor, whether a studio or a high-net-worth individual, you want to know if you will get your money back and then some. You look at models and comparatives, run spreadsheets with sensitivity analyses. You realize you’re taking a risk, so you try to find downside protection while retaining your upside.

With certain documentaries, however, value can be measured differently: in terms of social impact instead of financial profit. As a producer, I am always straight with financiers about their potential for financial returns. I can’t look a documentary investor in the eye and say, “You’ll get your money back,” unless we’re in the rare situation where we have a pre-sale and distribution guaranteed.

But I can tell a non-profit organization that it could be the best money they spend. Because a documentary, unique among communications media, can spread a story, share a message, and motivate social impact.

In this framework, I am talking about feature documentaries — fully-produced films with running times of 70-100 minutes. I am not talking about little video segments or other kinds of media.

There’s something special about a feature documentary. A feature-length running time allows narrative to unfold with grace and finesse, opens a set of characters to the audience, and offers sufficient time to go into details. It’s a truism that we don’t remember facts, we remember stories. The greater truth is that we remember facts when they are conveyed to us through storytelling.

That’s what a feature doc can do. It is long enough for an audience to get involved, and it does take some commitment, some setting-aside of time to experience it fully. Therefore, while feature documentaries are only rarely mass-market entertainment, they are profound opportunities for core audience connection.

Non-profits face a continuing challenge: making people care. If you’re running a non-profit organization, you need to keep your current constituents while also expanding your base.

But non-profits have a significant business advantage over other entities that may finance movies: non-profits don’t have to post quarterly profits or keep their shareholders happy. Many of them define success as sharing their message by engaging people in greater numbers and with greater depth.

Freed from the constraint of the financial profit-motive, non-profits are well-positioned to become the perfect financiers for social impact documentaries, because docs can provide exceptional social impact returns. For the same money as a few “opinion maker” TV commercials on CNN, MSNBC, or Fox News — commercials that most people will miss because they’re going to the bathroom or fast-forwarding — a non-profit can make, market, and distribute captivating documentary that can reach more people and will live for a long time.

As an example,A Plastic Oceanis now being seen worldwide, and has been screened for national legislatures, city councils, and environmental organizations. It is inciting policy change and social change. The film was financed primarily by three non-profit foundations (Plastic Oceans Foundation, Adessium Foundation, and Hemera Foundation), and our funders could not more pleased with the social impact value and return-on-investment.

To be clear: the model I’m describing is not for small, cash-strapped non-profits. It is viable for larger non-profits and NGOs, organizations that have a sound financial base and scale. It is also viable for collaborative partnerships among like-minded non-profits that, by working together, can achieve common goals.

To put some numbers around this, it costs $500,000 a few million dollars to make a feature documentary (the wide variation in cost is a factor of the scale and complexity of the film), and another $100,000-to-$500,000 to market and distribute it. That’s the price of admission when seeking to put a large social impact issue onto the national or international agenda.

It’s a price many larger non-profits and NGOs are paying already but, I would argue, paying for media that will not be as compelling, enduring, emotional, or inciting-to-action as a strong feature doc. In the social impact arena, when the right non-profits/NGOs place their resources in the right documentary, it can truly be the perfect — and most cost-effective — marriage.